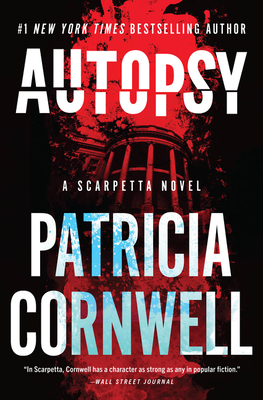 By Patricia Cornwell
$28.99
Not Yet Published - Available for Pre-Order Now

This is book number 25 in the Kay Scarpetta series.

Scarpetta is back! In this twenty-fifth in the electrifying, landmark #1 bestselling thriller series chief medical examiner Dr. Kay Scarpetta hunts an ingenious killer who has mastered cutting-edge science for the most nefarious ends.

Forensic pathologist Kay Scarpetta has returned to Virginia as the chief medical examiner. Finding herself the new girl in town once again after being away for many years, she’s inherited an overbearing secretary and a legacy of neglect and possible corruption.

She and her husband Benton Wesley, now a forensic psychologist with the U.S. Secret Service, have relocated to Old Town Alexandria where she’s headquartered five miles from the Pentagon in a post-pandemic world that’s been torn by civil and political unrest. Just weeks on the job, she’s called to a scene by railroad tracks where a woman’s body has been shockingly displayed, her throat cut down to the spine, and as Scarpetta begins to follow the trail, it leads unnervingly close to her own historic neighborhood.

At the same time, a catastrophe occurs in a top secret private laboratory in outer space, and at least two scientists aboard are found dead. Appointed to the highly classified Doomsday Commission that specializes in sensitive national security cases, Scarpetta is summoned to the White House Situation Room and tasked with finding out what happened. But even as she works the first crime scene in space remotely, an apparent serial killer strikes again. And this time, Scarpetta could be in greater danger than ever before.

In this latest novel in her groundbreaking Kay Scarpetta series, Patricia Cornwell captivates readers with the shocking twists, high-wire tension, and forensic detail that she is famous for, proving once again why she’s the world’s #1 bestselling crime writer.

“When it comes to the forensic sciences, nobody can touch Cornwell.”
— New York Times Book Review

“Cornwell’s fans will welcome the latest Kay Scarpetta mystery... Following the twists of the cyber hacking, and delving into the death of the young woman, will give Cornwell fans another great read with their favorite neurotic medical examiner. Have fun!”
— Suspense Magazine on Chaos

“In Scarpetta, Patricia Cornwell has a character as strong as any in popular fiction.”
— Wall Street Journal

“In this tense forensic thriller, an ingenious killer threatens to destroy that which Kay Scarpetta loves most—her family.”
— Daily News on Flesh and Blood

“Bestseller Cornwell’s thrilling 22nd novel featuring Dr. Kay Scarpetta . . . pits the chief medical examiner against a threat uncomfortably close to home. . . . Series fans may be pleasantly shocked by the return of a once-vanquished nemesis.”
— Publishers Weekly on Flesh and Blood

“There is a quiet intensity to Ms. Cornwell’s writing that compels you to read, then the eeriness sets in. . . . With Chaos, once again Patricia Cornwell mesmerizes with her astounding scientific knowledge, her keen ear for dialogue and the human psyche, all woven together flawlessly.”
— FreshFiction.com on Chaos

“Thrilling…. Readers new to Cornwell will find themselves involved from the very first page, as will the veterans. Chaos is one book you should not miss.”
— Bookreporter.com

“Cornwell is still the ace of forensic science mysteries. Dr. Kay Scarpetta and her family and friends just keep growing as characters, and Cornwell’s plots are still taut and tangled enough to make readers afraid to miss even a bit of minutiae. With Flesh and Blood, Cornwell is at the top of her game.”
— RT Book Reviews

“Dr. Kay Scarpetta… [is] an awesome force in the field of forensic science.”
— New York Times Book Review on Flesh and Blood

“Everyone knows Scarpetta; she has the wit, intelligence, and strength that any forensic sleuth should own. This never-stop action plot is yet another gift to readers from Patricia Cornwell-a literary artist that is never going to stop writing some of the best and most memorable thrillers out there.”
— Suspense Magazine on Flesh and Blood

“Stir phony IRS agents and wisecracking Boston cops and a few red herrings into the mix, and you’ve got the makings of a real puzzler. . . . A trademark Cornwell mystery: terse and tangled, messy and body-fluidy, and altogether satisfying.”
— Kirkus Reviews on Depraved Heart

“Scarpetta is one of the most believable characters in crime fiction.”
— Vancouver Sun

“Cornwell’s books run on high octane fuel, a cocktail of adrenalin and fear”
— The Times (London)