V for Victory: A Novel (Hardcover) 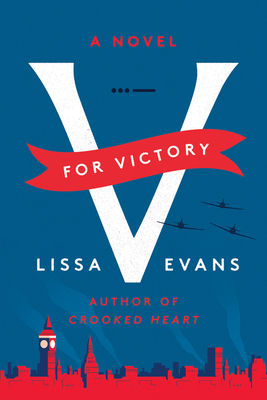 In this witty, charming follow-up to the acclaimed Crooked Heart, the life of lies a small time scammer and her adopted son have constructed in London becomes endangered during the tumultuous final months of World War II.

It’s late 1944. Hitler’s rockets are raining down on London with vicious regularity and it’s the coldest winter in living memory. The Allies are gaining ground, but victory is certainly dragging its feet.

In a large house next to Hampstead Heath, Vee Sedge is barely scraping by with a herd of lodgers to feed and her young charge Noel, almost fifteen now, to clothe and educate. When she witnesses an accident and finds herself in court, the repercussions are both unexpectedly marvelous and potentially disastrous. Because Vee is not actually the person she’s pretending to be, and neither is Noel.

Victory is coming. Yet the end of the war won’t just mean peace, but discovery . . .

With caustic wit and artful storytelling, Lissa Evans summons a time when the world could finally hope to emerge from the chaos of war. As witty as Old Baggage and poignant as Crooked Heart, V for Victory once again reveals Evans to be one of the most original and entertaining writers at work today.

"With warmth and humor to spare, this book is a balm."
— Library Journal, starred review

“Darkly comic. … The eclectic characters are all uniquely human, and their interactions—there are no dull conversations—make the novel witty and moving.”
— Booklist

“This gorgeous novel [is] suffused with Evans’ trademark blend of wit and pathos.”
— The Times (London)

“A book to be treasured and returned to again and again.”
— The Independent (London)

“[A] brilliant comedy drama … packed with wonderful characters and so full of wartime atmosphere you can practically hear the sirens.”
— The Daily Mail (London), Best Books of the Year

“I try not to say, ‘If there’s one novel you should read this summer..’ but Crooked Heart tempts me to say it.”
— NPR