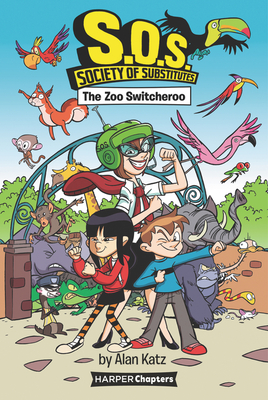 If there’s a problem in school, there’s no substitute for the world-saving substitute teachers of the S.O.S.! This is the second book of this hilarious, highly illustrated early chapter book series.

Oh no! Noah—part time classroom pet, full-time evil mastermind—has his paws set on setting free all the animals at the city zoo.

Good thing that when there’s a problem, there’s no substitute for the super substitute teachers of the S.O.S.!

HarperChapters build confident readers one chapter at a time! With short, fast-paced books, art on every page, and milestone markers at the end of every chapter, they're the perfect next step for fans of I Can Read!

Alan Katz has written more than 40 highly acclaimed children’s books, including Take Me Out of the Bathtub and Other Silly Dilly Songs, The Day the Mustache Took Over, OOPS!, Really Stupid Stories for Really Smart Kids, and two Awesome Achievers titles. Alan has received many state awards for children’s literature, and he frequently visits schools across the country.

Born in 1976 in Sabadell, Spain, Alex Lopez started drawing when he was a kid, which inspired a love of creating comics and cartoons. With over fifteen years of working as an illustrator, he is often asked “What is your secret?” His answer is simple—listening to music and eating chocolate!