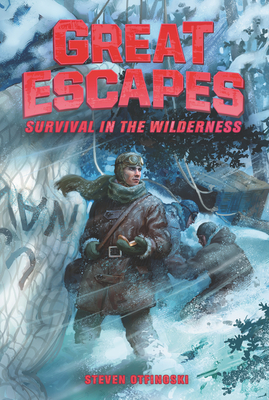 Are you ready for some of the most exciting, death-defying escape stories ever told? The fourth installment in the Great Escapes series is here—perfect for fans of the I Survived series!

December 13, 1920. It was a typical Monday morning when three US Navy officials boarded a hot air balloon for an easy, routine training flight. But as evening came, heavy rain and wind knocked Lieutenants Louis Kloor, Stephen Farrell, and Walter Hinton off course, eventually forcing a crash landing deep within the snowy Canadian wilderness.

As the men searched for salvation, they were overcome by freezing temperatures, starvation, and fatigue. To survive this harrowing experience, the brave military officers would have to go up against their greatest enemies yet—desperation and despair.

From reluctant reader to total bookworm, each book in this page-turning series—featuring fascinating bonus content and captivating illustrations—will leave you excited for the next adventure!

Steven Otfinoski has written more than two hundred books for young readers. He is also a playwright and has his own theater company that brings one-person plays about American history to schools. He lives in Connecticut with his family.

James Bernardin is a versatile and prolific illustrator of many acclaimed books for children. He has illustrated Laura Numeroff's Would I Trade My Parents?, Eve Bunting's Too Many Monsters, and Candy Chand's The Twelve Prayers of Christmas. He has also created artwork for numerous book covers, including Mary Pope Osborne's Tales from the Odyssey series.

James lives on Bainbridge Island in Washington State with his wife, Lisa, and two sons, Wyeth and Bryson.

"Well-written and effectively researched. This fourth installment in this exciting series will appeal to those who love adventure and survival stories; a solid choice."
— School Library Journal