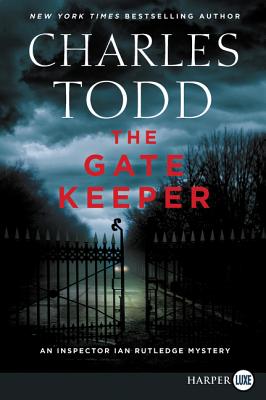 This is book number 20 in the Inspector Ian Rutledge Mysteries series.

On a deserted road, late at night, Scotland Yard’s Ian Rutledge encounters a frightened woman standing over a body, launching an inquiry that leads him into the lair of a stealthy killer and the dangerous recesses of his own memories in this twentieth installment of the acclaimed New York Times bestselling series.

Hours after his sister’s wedding, a restless Ian Rutledge drives aimlessly, haunted by the past, and narrowly misses a motorcar stopped in the middle of a desolate road. Standing beside the vehicle is a woman with blood on her hands and a dead man at her feet.

She swears she didn’t kill Stephen Wentworth. A stranger stepped out in front of their motorcar, and without warning, fired a single shot before vanishing into the night. But there is no trace of him. And the shaken woman insists it all happened so quickly, she never saw the man’s face.

Although he is a witness after the fact, Rutledge persuades the Yard to give him the inquiry, since he’s on the scene. But is he seeking justice—or fleeing painful memories in London?

Wentworth was well-liked, yet his bitter family paint a malevolent portrait, calling him a murderer. But who did Wentworth kill? Is his death retribution? Or has his companion lied? Wolf Pit, his village, has a notorious history: in Medieval times, the last wolf in England was killed there. When a second suspicious death occurs, the evidence suggests that a dangerous predator is on the loose, and that death is closer than Rutledge knows.

“As always in this singular series... the melancholy tone that distinguishes the Rutledge series is a reminder that war never ends for the families and friends of lost loved ones. It just retreats into the shadows.”
— Marilyn Stasio, New York Times Book Review

TOP PICK IN MYSTERY:  “Readers can’t ask for more than Todd’s masterful plotting, terrific characters and one of the finest protagonists in modern suspense.”
— BookPage.com

“The best one yet... It is a rare case when a book this far into a series can still surprise, but that is exactly what The Gate Keeper does. Highly recommended for historical mystery fans.”
— The BOLO Books Review

“In a series known for intelligent plots, Todd’s 20th novel about Ian [Rutledge] excels. The Gate Keeper delivers an emotional novel... as well as an involving story about how the war affected other former soldiers and the families and towns to which they came home.”
— SouthFlorida.com

“This mystery is one of the finest in the series... One of the best I have read by Charles Todd—very highly recommended!”
— Historical Novels Review

“Charles Todd (actually a mother-son writing team) pulls off the voice-in-the-head device exquisitely. Moreover, the series is populated with highly nuanced characters, and the historical research is spot on. In Racing the Devil, the pacing is compelling.”
— Newark Star Ledger

“Todd writes a rich mystery, but in investigating the murder Rutledge also probes the psychic wounds of the village and tries to minister to the collective survivor guilt of the living. ‘The dead,’ as the voice in his head tells him, ‘still believe it was worth dying for.’”
— Marilyn Stasio, New York Times Book Review