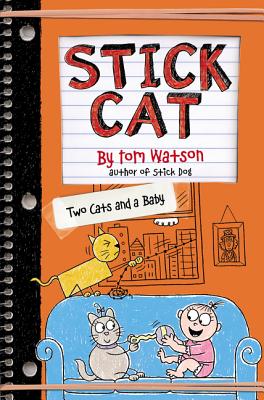 This is book number 4 in the Stick Cat series.

Now that their owners are married, Stick Cat and his best friend, Edith, live in the same apartment. There’s someone else in the family too—Millie, the new gurgling, babbling baby.

When Edith declares that Millie’s sounds are actually flattering compliments about Edith, her devotion to the new baby is complete. There’s harmony in the home—until Grandma Cobb arrives to babysit. That’s when things quickly spin out of control.

A mishap leaves Grandma trapped inside the bathroom—and locked away from Millie. Stick Cat needs to rescue Grandma. But he also needs to help Edith in her new role as babysitter-in-chief. It just might be Stick Cat’s toughest mission ever.

Fans of the Stick Dog series and other quick, funny reads will delight in this funny, furry, feline fracas. Stick Cat is on the job!

Tom Watson lives in Chicago with his wife, daughter, and son. He also has a dog, as you could probably guess. The dog is a Labrador-Newfoundland mix. Tom says he looks like a Labrador with a bad perm. He wanted to name the dog "Put Your Shirt On" (please don't ask why), but he was outvoted by his family. The dog's name is Shadow. Early in his career Tom worked in politics, including a stint as the chief speechwriter for the governor of Ohio. This experience helped him develop the unique, storytelling narrative style of the Stick Dog books. More important, Tom's time in politics made him realize a very important thing: Kids are way smarter than adults. And it's a lot more fun and rewarding to write stories for them than to write speeches for grown-ups.