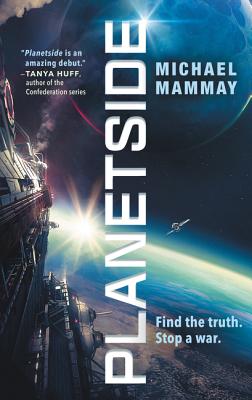 By Michael Mammay
Email or call for price.
Not Available at This Time

This is book number 1 in the Planetside series.

“Planetside is a smart and fast-paced blend of mystery and boots-in-the-dirt military SF that reads like a high-speed collision between Courage Under Fire and Heart of Darkness.” – Marko Kloos, bestselling author of the Frontline series

A seasoned military officer uncovers a deadly conspiracy on a distant, war-torn planet…

War heroes aren't usually called out of semi-retirement and sent to the far reaches of the galaxy for a routine investigation. So when Colonel Carl Butler answers the call from an old and powerful friend, he knows it's something big—and he's not being told the whole story. A high councilor's son has gone MIA out of Cappa Base, the space station orbiting a battle-ravaged planet. The young lieutenant had been wounded and evacuated—but there's no record of him having ever arrived at hospital command.

The colonel quickly finds Cappa Base to be a labyrinth of dead ends and sabotage: the hospital commander stonewalls him, the Special Ops leader won't come off the planet, witnesses go missing, radar data disappears, and that’s before he encounters the alien enemy. Butler has no choice but to drop down onto a hostile planet—because someone is using the war zone as a cover. The answers are there—Butler just has to make it back alive…

“Not just for military SF fans—although military SF fans will love it—Planetside is an amazing debut novel, and I’m looking forward to what Mammay writes next.” – Tanya Huff, author of the Confederation and Peacekeeper series

Michael Mammay is a retired army officer and a graduate of the United States Military Academy. He has a master’s degree in military history and is a veteran of Desert Storm, Somalia, and the wars in Iraq and Afghanistan. He lives with his family in Georgia. www.michaelmammay.com

“This was a brisk, entertaining novel. [...] I was reminded a bit of some of John Scalzi’s Old Man’s War novels.”
— SFFWorld

“A tough, authentic-feeling story that starts out fast and accelerates from there.”

“Not just for military SF fans—although military SF fans will love it—Planetside is an amazing debut novel, and I’m looking forward to what Mammay writes next.”
— Tanya Huff, author of the Confederation and Peacekeeper series

“PLANETSIDE is a smart and fast-paced blend of mystery and boots-in-the-dirt military SF that reads like a high-speed collision between Courage Under Fire and Heart of Darkness.”
— Marko Kloos, bestselling author of the Frontline series

“The book was an enjoyable read and would likely sit well with any fan of military SF looking for an action-thriller to browse while lying in the sun at the beach.”
— Chris Kluwe for Lightspeed Magazine

“If Cold Welcome and Old Man’s War had a love child you might get something like PLANETSIDE. And it would be, and is, pretty damn awesome. I would say it’s awesome for a debut novel, but that isn’t nearly praise enough. It’s just plain awesome.”
— Reading Reality

“In Planetside Mammay mixes a brevity of prose with feeling of authenticity that would be remarkable in many experienced authors, let alone in a debut novel. Definitely the best military sci-fi debut I’ve come across in a while.”
— Gavin Smith, author of Bastard Legion and Age of Scorpio

“A fast-paced tale of military investigation that reads like a blend of Jerry Pournelle and NCIS. Michael Mammay brings an exciting and authentic voice of experience to military science fiction.”

“Planetside, the debut novel by Michael Mammay, is an easy book to love. [...] a page-turner and an extremely satisfying read.”
— Washington Independent Review of Books

“If you like military SF you’ll love this or if you like SF mysteries or probably just SF in general. It’s a highly impressive first novel that left a real impact.”
— SFCrowsnest