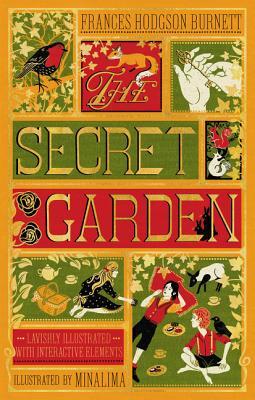 The classic English children’s novel of three young friends and one special garden, stunningly reimagined in a deluxe full-color edition, illustrated with beautiful artwork and unique interactive features created by the award-winning design studio behind the graphics for the Harry Potter film franchise, MinaLima—sure to delight fans of the live action film versions coming in 2018 from Disney and Universal Studios.

After tragedy leaves Mary Lennox orphaned, the bratty ten-year-old British girl is sent from her home in India to Yorkshire, to live with Archibald Craven, a distant uncle whom she has never met.

At first, life in the isolated Misselthwaite Manor is as cold and desolate as the bleak moor outside her window. Then Mary learns the story of the late Mrs. Craven, the estate’s mistress, who spent hours in a walled garden tending to her roses. Mrs. Craven died after an accident in the garden, and her forlorn husband forbid anyone to enter it again, locking it and burying the key. The tale piques Mary’s curiosity and inspires her to find this secret garden, a search that introduces her to new friends, including a robin redbreast; Dickson, a twelve-year-old boy with a kindness to animals; and Colin, her secluded sickly first-cousin. Spending time in the garden transforms Mary and Colin and ultimately, life at Misselthwaite Manor itself.

Illustrated throughout, The Secret Garden comes with ten interactive features, including:

Frances Hodgson Burnett (1849–1924) grew up in England, but she began writing what was to become The Secret Garden in 1909, when she was creating a garden for a new home in Long Island, New York. Frances was a born storyteller. Even as a young child, her greatest pleasure was making up stories and acting them out, using her dolls as characters. She wrote over forty books in her lifetime.

Thus has the design team MinaLima transformed one of Frances Hodson Burnett’s great classics from a traditional story illustrated in a traditional style…to a dazzling tour de force in which no opportunity for adornment goes untaken.”
— Wall Street Journal