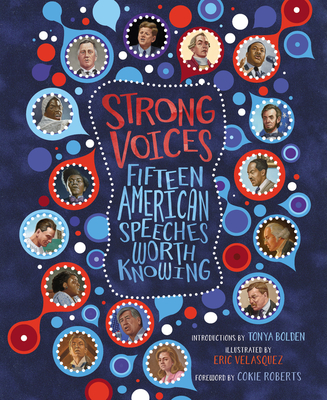 Strong Voices: Fifteen American Speeches Worth Knowing is a collection of significant speeches, made both by those who held the reins of power and those who didn’t, at significant times in American history. Read the original words—sometimes abridged and sometimes in their entirety—that have shaped our cultural fabric. A Chicago Public Library Best Book!

"A wide-ranging collection of speeches and a worthwhile resource for students of American history." —Booklist

"A golden celebration of the multicultural voices who demand the U.S.—and the world—do better." —Kirkus

Introductions by acclaimed writer Tonya Bolden provide historical context and critical insights to the meaning and impact of every speech. Illustrations by award-winning artist Eric Velasquez illuminate what it was really like at each moment in history. This collection includes the following:

Strong Voices includes a foreword by #1 New York Times bestselling author and celebrated journalist Cokie Roberts, as well as a timeline in the back of the book, along with letters to the reader from Tonya Bolden and Eric Velasquez.

Strong Voices is a tremendous introduction to the extraordinary words spoken in history.

Tonya Bolden’s books have earned much praise and numerous starred reviews. Her work has been recognized with the NCTE Orbis Pictus Award for Outstanding Nonfiction for Children and the Carter G. Woodson Book Award and listed as a CBC/NCSS Notable Social Studies Trade Book for Young People. She is also the recipient of the Children’s Book Guild of Washington, DC’s Nonfiction Award for her body of work. Her Maritcha: A Nineteenth-Century American Girl was a Coretta Scott King Author Honor book. Visit her website at www.tonyaboldenbooks.com.

Eric Velasquez has illustrated numerous children’s books, including Strong Voices: Fifteen American Speeches Worth Knowing and Schomburg: The Man Who Built a Library by Carole Boston Weatherford. He won the Pura Belpré Award for his illustrations in Grandma’s Gift. He won the John Steptoe New Talent Award for his illustrations in The Piano Man, written by Debbi Chocolate. Visit his website at www.ericvelasquez.com.

Cokie Roberts was a political commentator for ABC News and NPR. She won countless awards and in 2008 was named a “Living Legend” by the Library of Congress. She was the author of the New York Times bestsellers We Are Our Mothers’ Daughters, Founding Mothers, Ladies of Liberty, and, with her husband, the journalist Steven V. Roberts, From This Day Forward and Our Haggadah.

“A wide-ranging collection of speeches and a worthwhile resource for students of American history.”—ALA Booklist — Booklist (starred review)

“A golden celebration of the multicultural voices who demand the U.S. —and the world—do better.”—Kirkus Reviews — Kirkus Reviews (starred review)