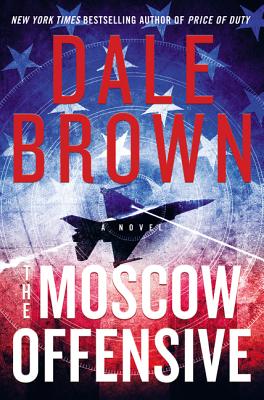 This is book number 4 in the Brad McLanahan series.

The inept American president, Stacy Anne Barbeau, has failed to account for the Russian threat. Top-notch aviator Brad McLanahan and the elite Iron Wolf Squadron have joined forces with the Alliance of Free Nations in Eastern Europe to prepare for the imminent horrifying attack. Working with cutting-edge technology, the team will expertly pilot CIDs (Cybernetic Infantry Devices)—twelve-foot-tall humanoid combat robots—each armed with more firepower than a conventional platoon.

But their state-of-the-art weapons and honed battle skills may not be enough to stamp out this new menace. For the Russians have reverse engineered their own combat robots and they are smuggling them across America’s borders, planning to attack from within. McLanahan and the Iron Wolf Squadron will once again put their lives on the line to fiercely protect the home of the brave and the free world.

“Dale Brown is a superb storyteller.”

“An off-the-books mercenary unit is the world’s best bet against unchecked Russian aggression… A fun read that really shines with the author’s convincing knowledge of military aircraft.”
— Kirkus Reviews

“Brown has long been a master at high-tech thrillers, and… there is no denying that he knows his stuff… Even with a long-running series, he continues to find ways to keep the action lively and relevant. For the Tom Clancy crowd, Brown remains the go-to guy.”
— Booklist

“A very smart, timely, and terrifying political thriller… Current, spot-on, and full of bone-crushing action, Dale Brown’s The Moscow Offensive is one of his best novels to date, and a sure bet to please action junkies who also like heaping sides of politics and next-gen tech.”
— TheRealBookSpy

“Strap in, for there are shootouts on every page plus a well-choreographed climactic raid. ... A compelling, fast-paced, and imaginative techno-thriller. ... There’s so much action here it’s a wonder there aren’t bullet holes and bomb craters on every page.”
— Kirkus Reviews

“Fans will find Brown in fine form here, and newcomers who enjoy top-notch military fiction will have no trouble diving into the deep end.”
— Booklist

“All too real and eerily authentic. One of the godfathers of techno-thrillers, Brown has saved some of his best and most creative story ideas for [Price of Duty].”
— The REAL Book Spy

“A tense, atmospheric thriller with a ripped from the headlines plot, PRICE OF DUTY moves at a breakneck pace. Highly readable, enormously entertaining, its twists and turns will keep you glued to the pages.”
— Karen Robards, New York Times Bestselling author