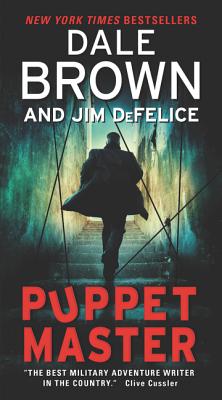 By Dale Brown, Jim DeFelice
Email or call for price.
Not Available at This Time

This is book number 1 in the Puppetmaster series.

Louis Massina is revolutionizing the field of robotics. His technological wonders are capable of locating disaster survivors, preventing nuclear meltdowns, and replacing missing limbs. After one of Massina’s creations makes a miraculous rescue, an FBI agent recruits him to pursue criminals running a massive financial scam—and not coincidentally, suspected of killing the agent’s brother. Massina agrees to deploy a surveillance “bot” that uses artificial intelligence to follow its target. But when he’s thrust into a dangerous conspiracy, the billionaire inventor decides to take matters into his own hands, unleashing the greatest cyber-weapons in the world and becoming the Puppet Master.

Jim DeFelice is the co-author, with former U.S. Navy SEAL Chris Kyle, of the multi-million-copy bestseller American Sniper, the source for Clint Eastwood’s film starring Bradley Cooper. His other books include Omar Bradley: General at War; Rangers at Dieppe; and West Like Lightning: The Brief, Legendary Ride of the Pony Express. He lives in upstate New York.