Love and Other Lies: A Novel (Paperback) 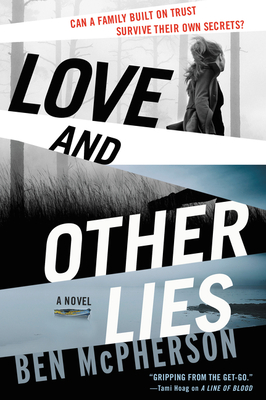 A mother and father search for the truth behind their daughter’s disappearance in this stunning psychological suspense novel that takes Nordic noir to a level that is “emotional, painful, and utterly memorable” (Alex Marwood, Edgar Award–winning author of The Poison Garden).

Cal and Elsa have the perfect relationship; they’re still deeply in love after fifteen years of marriage, they have three incredible children, and most importantly, they never lie to each other. But when their oldest daughter disappears in a summer camp shooting outside Oslo, Norway, Cal and Elsa’s lives are changed forever.

Cal believes his family is strong enough to weather this blow and hold out hope for Licia’s return, but as they all deal with the tragedy in different ways, doubts begin to creep in. Their younger daughter, Vee, is definitely hiding something from her parents. And Elsa would never lie to Cal, but is she telling him the whole truth? As the reality of what happened at the camp comes to light, each family member’s morals will be tested. In the end, will their love for one another be enough to hold them together?

Ben McPherson’s debut novel was the highly acclaimed A Line of Blood. He is a television producer and director, as well as a writer, and for more than ten years worked for the BBC, among other outlets. He is also an occasional columnist for Aftenposten, Norway’s leading quality daily, and lives in Oslo with his wife and two children.

“A gripping thriller, Love and Other Lies explores xenophobia and white supremacy as it also portrays the psychic damage inflicted by certitude and, conversely, by doubt… The novel explodes in a viscerally shocking conclusion.”
— Fredericksburg Free Lance-Star

"An important story with lots and lots of topics to discuss and a story that is definitely pertinent to the times in which we live. This is a book that you will think about for a long time after you put it down."
— The Southern Bookseller Review

“A page-turning novel that keeps you on the edge of your seat, right up to the last word on the last page.”
— RedCarpetCrash.com

“Fascinating. From the first page of A LINE OF BLOOD, I was hooked. I couldn’t put it down!”
— Lisa Jackson, New York Times bestselling author

“An impressive slice of domestic suspense… McPherson is a dab hand at creating realistically flawed characters to whom one just about manages to give the benefit of the doubt, and the ending… is still shocking.”
— The Guardian

“McPherson’s mystery is carefully constructed, a literary house of cards. Layer upon layer of revelation increases the tension.”
— Kirkus Reviews

“McPherson displays a rare skill for creating characters with depth in a world that is splintering around them.”
— Daily Mail (UK)

“Gripping from the get-go, A Line of Blood will have readers wondering what they might be capable of in the face of the terrible isolation of self within a family running off the rails.”
— Tami Hoag, #1 New York Times Bestselling author of Cold Cold Heart

“A family drama packed with suspense.”
— The Sunday Post (UK)

“Many good novels pose the question: how should you act in certain circumstances? This is the question McPherson puts, and the answer that he finds for his characters seems to me admirable and yet morally dubious. This is how it should be.”
— The Scotsman (UK)

“McPherson’s debut prolongs suspense until the dreadful truth becomes undeniable, raising the questions of how these well-drawn characters will survive and how justice is best served.”
— Library Journal

“A compelling read for its vivid portrait of a family whose secrets are hidden behind a mask of normalcy until a violent act rips it away… This is a novel for those who like their suspense written in dark tones.”
— New York Journal of Books

“A Line of Blood delves deep into family dynamics for a psychological thriller with realistic twists that builds to a surprising denouement… [An] elegantly constructed plot reveals the secrets that bind these characters as well as pull them apart… An engrossing - and very dark - domestic thriller.”
— Washington Post

“To say that the book is fascinating and hard to put down would be an understatement.... Former relationships and shameful episodes in Alex and Millicent’s lives keep coming to light, making the tangle increasingly snarled rather than more understandable. And this quite effectively heightens the suspense.”
— ReviewingtheEvidence.com