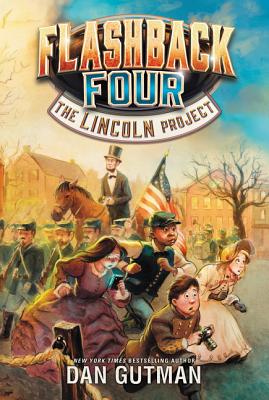 This is book number 1 in the Flashback Four series.

“History can be hilarious, at least in the hands of author Dan Gutman.” —Washington Post

In New York Times bestselling author Dan Gutman's all-new series, which blends fascinating real history with an action-packed and hilarious adventure, four very different kids are picked by a mysterious billionaire to travel through time and photograph some of history's most important events. This time, the four friends are headed to 1863 to catch Abraham Lincoln delivering his famous Gettysburg Address.

They'll have to work together to ask the right questions, meet the right people, and capture the right moment. And most important—not get caught! Back matter separating fact from fiction and real black-and-white photographs throughout make Flashback Four the perfect mix of true history and uproarious fun.

Perfect for fans of the bestselling Genius Files series, and the Baseball Card Adventure series.

“History can be hilarious, at least in the hands of author Dan Gutman.”
— Washington Post

“Breezy, good-natured fun and a fair amount of history, too”
— Kirkus Reviews

“A fun and fast read, illustrated with photos of the past that really do exist.”
— Booklist

“This will be a high-demand title.”
— School Library Journal