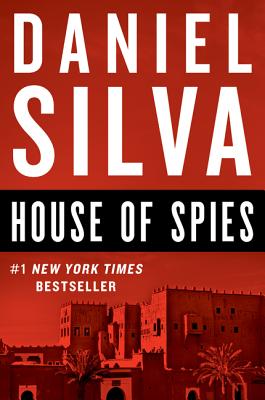 This is book number 17 in the Gabriel Allon series.

A Kirkus Best Book of the Year

A heart-stopping tale of suspense, Daniel Silva’s runaway bestseller, The Black Widow, was one of 2016’s biggest novels. Now, in House of Spies, Gabriel Allon is back and out for revenge – determined to hunt down the world’s most dangerous terrorist, a shadowy ISIS mastermind known only as Saladin.

Four months after the deadliest attack on the American homeland since 9/11, terrorists leave a trail of carnage through London’s glittering West End. The attack is a brilliant feat of planning and secrecy, but with one loose thread.

The thread leads Gabriel Allon and his team of operatives to the south of France and to the gilded doorstep of Jean-Luc Martel and Olivia Watson. A beautiful former British fashion model, Olivia pretends not to know that the true source of Martel’s enormous wealth is drugs. And Martel, likewise, turns a blind eye to the fact he is doing business with a man whose objective is the very destruction of the West. Together, under Gabriel’s skilled hand, they will become an unlikely pair of heroes in the global war on terror.

Written in seductive and elegant prose, the story moves swiftly from the glamour of Saint-Tropez to the grit of Casablanca and, finally, to an electrifying climax that will leave readers breathless long after they turn the final page.

But House of Spies is more than just riveting entertainment; it is a dazzling tale of avarice and redemption, set against the backdrop of the great conflict of our times. And it proves once again why Daniel Silva is “quite simply the best” (Kansas City Star).

Daniel Silva is the award-winning, #1  New York Times bestselling author of The Unlikely Spy, The Mark of the Assassin, The Marching Season, The Kill Artist, The English Assassin, The Confessor, A Death in Vienna, Prince of Fire, The Messenger, The Secret Servant, Moscow Rules, The Defector, The Rembrandt Affair, Portrait of a Spy, The Fallen Angel, The English Girl, The Heist, The English Spy, The Black Widow, House of Spies and The Other Woman.  He is best known for his long-running thriller series starring spy and art restorer Gabriel Allon. Silva’s books are critically acclaimed bestsellers around the world and have been translated into more than 30 languages. He resides in Florida with his wife, television journalist Jamie Gangel, and their twins, Lily and Nicholas. For more information visit www.danielsilvabooks.com

“An irresistible thriller…. The phrase ‘#1 New York Times best-selling author’ gets bandied about a lot (Which list? For how long?), but in Silva’s case, it means exactly what it says.”
— Booklist, starred review

“Written by one of our greatest living spy novelists, House of Spies gives us protagonist Gabriel Allon in his 17th adventure. The novel features Silva’s taut and compelling dialogue and keen insight into the human psyche.”
— Dallas Morning News

“Silva’s success lies in his mix of authenticity and charm; his swings from global fears to domestic comforts.… There’s exotic scenery, insight into both history and current events, wit, romance, and a lot of heart.... It’s a recipe that keeps his readers coming back for more.”
— Pittsburg Post-Gazette

“Riveting…. Silva’s writing has lost none of its elegance. He provides readers with just enough real-world geopolitics to make sense of his narrative, and his depictions of the different styles of the world’s diverse intelligence services is fascinating as always.… Another chilling glimpse inside global terror networks from a gifted storyteller.”
— Kirkus, starred review

“One of Silva’s most entertaining books.... It’s uncanny how Daniel Silva keeps doing this. The opening chapters... feel like they were ripped from the headlines.... But when Silva created the scenario in his book, the headlines hadn’t been written yet.”
— Fort Worth Star-Telegram