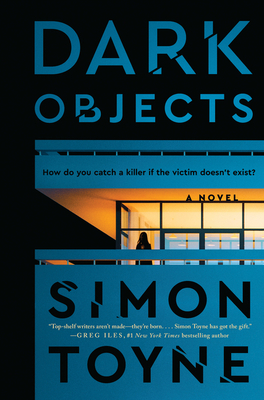 This is book number 1 in the Laughton Rees series.

Forensics expert Laughton Rees hunts an unusually clever killer who appears to be staging murder scenes just for her in this twisty new psychological thriller by the bestselling author of the Sanctus trilogy.

How do you catch a killer if the victim doesn’t exist?

A glamorous woman is murdered in her ultra-luxurious London mansion and her husband goes missing. But according to public records, neither of them exists.

The only leads police have are several objects arranged around the woman’s body, including a set of keys and a book called How to Process a Murder by Laughton Rees—a book that appears to have helped the killer forensically cleanse the crime scene.

Laughton Rees is an academic who doesn’t usually work live cases after the brutal murder of her mother as a teen left her traumatized and emotionally scarred. But the presence of her book at this scene draws her unwillingly into the high-profile investigation and media circus that springs up around it. As the dark objects found beside the body lead her closer to the victim’s identity, a dangerous threat to Laughton and her daughter emerges, as well as painful memories of her past related to the man she has always blamed for her mother’s death: John Rees, Laughton’s father, the current Metropolitan Chief Commissioner and a man she has not spoken to in twenty years.

Laughton’s family was destroyed once and she built herself a new one. Now, she has to face her darkest fears and help catch a killer before this one is destroyed too.

Simon Toyne is the author of the internationally bestselling Sanctus trilogy (Sanctus, The Key and The Tower), The Searcher, The Boy Who Saw, and Dark Objects and has worked in British television for more than twenty years. As a writer, director and producer he’s made several award-winning shows, one of which won a BAFTA. He lives in England with his wife and family, where he is permanently at work on his next novel.

"A stunning novel! Part wily procedural, part relentless psychological thriller, Dark Objects will keep you on the edge of your seat from start to finish. And what a masterful voice, Toyne brings to his fiction." — Jeffery Deaver

"There are times when I read another author’s novel and it’s so darn good I just want to put down my own pen and retire because I can’t match it. This is that book. I was riveted, flummoxed, and completely captivated by these fascinating characters." — Tess Gerritsen

"[An] excellent police procedural.... Tannahill and Laughton make a superb investigative team…. A skilled storyteller, Toyne has upped his game with this one."  — Publishers Weekly (starred review) on Dark Objects

"An edgy psychological thriller that makes excellent use of its police procedural foundation....Toyne pulls out all the stops for a deliciously creepy, believable story that makes sharp turns with realistic characters.... Toyne’s plotting — and delving deep into the psychological aspects — make Dark Objects shine." — Florida Sun-Sentinel

“It was the premise that lured me into reading this novel and it didn’t disappoint.” — Globe and Mail (Toronto) on Dark Objects

"The pacing is superb and as the suspense ratchets up you will find it impossible to put the book down." — Peter Robinson on Dark Objects

“Dark Objects delivers a fascinating thriller that features an intense murder investigation while highlighting family relationships.... The twists and turns provide an unexpected shift that illustrates how cleverly the author laid the foundation.” — Novels Alive on Dark Objects

“Simon Toyne is one of my favorites, bringing a lean muscularity and textured richness to his thrillers. He has an eye for the unusual and the unsettling, shading his stories with moral complexity while never letting his foot off the pedal. In Solomon Creed, he’s created a hero for the ages. A word of warning: if you have anything else to get done, don’t crack open a Toyne thriller.” — Gregg Hurwitz on The Boy Who Saw

“When you read Sanctus, you’ll see just how frightening, ruthless and relentlessly entertaining an order of monks can be. Haunting in the best way.” — Brad Meltzer

"Top-shelf writers aren’t made—they’re born, and you can tell in two pages when you’ve found one. Simon Toyne has got the gift, and The Searcher proves it—his imagery, his language, and the cool mystery surrounding Solomon Creed and where he’s going. I think you’ll love this one.” — Greg Iles

“Brains beat brawn in this engrossing yarn, and a mind without a memory makes Toyne’s hero a hard character to—well, to forget.” — Kirkus Reviews (starred review) on The Boy Who Saw

"How do you create suspense?... That’s the defining strategy of The Searcher, as Simon Toyne holds information tantalizingly out of reach over the course of his wild, mysterious novel… Toyne grabs our attention, and he keeps it… The book moves so swiftly in part because it’s told roughly in the span of a day…the stakes escalating while mysteries pile on top of mysteries… I read it in a two-day fever.” — New York Times Book Review

“Not a dull page to be found anywhere. A thriller gem. Simon Toyne is a first class talent, speeding in the fast lane to the top of the genre.” — Steve Berry on The Searcher

Toyne has turned out a subtle yet compelling religion-flavored thriller that engenders a “one more page, one more chapter” urgency, much like his previous trilogy.” — Library Journal (starred review) on The Searcher

“Toyne’s descriptive skill makes for a story that is cinematically vivid. . . . The relentless pace makes the action addicting.” — Publishers Weekly on The Tower

“If you like your secrets deeply hidden and your action breakneck, then Toyne’s sophomore thriller is just the ticket.... As in his debut, Toyne delivers a gripping, intricate story of religious and political intrigue that's sweeping yet somehow intimate and very personal. Wow.” — Booklist (starred review) on The Key

“Remarkable . . . intrigue befitting an action thriller . . . . Toyne has written a well-developed, exciting debut, the first volume of a projected trilogy, that doesn’t tip off the ending midnovel like so many of its kind. Its ‘just one more page, one more chapter’ urgency keeps you reading into the night, and the final revelation of the Citadel’s secret is haunting.” — Library Journal (starred review) on Sanctus