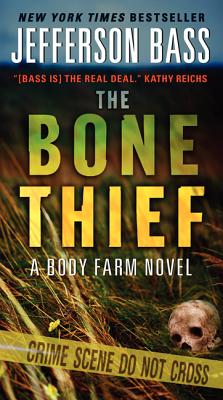 By Jefferson Bass
Email or call for price.
Not Available at This Time

This is book number 5 in the Body Farm Novel series.

It seems a routine case for Dr. Bill Brockton, the exhumation of a body to obtain a bone sample for a DNA paternity test. But a shocking discovery awaits Brockton and his colleagues when the coffin is opened: the corpse inside has been horribly violated. The grisly find embroils the Body Farm's founder in a dangerous investigation into a flourishing black market in body parts, as Brockton is recruited for an FBI sting to bring down a postmortem chop shop—using corpses from the Body Farm as bait.

But as he descends deeper into a ghoulish empire on the trail of a ruthless grave robber, Brockton faces a devastating choice that could compromise the investigation and place him in even graver peril. And for the sake of a damaged friend—a medical examiner who has lost his hands—Brockton may be forced to risk his principles, his freedom . . . and even his life.

Jefferson Bass is the writing team of Jon Jefferson and Dr. Bill Bass. Dr. Bass, a world-renowned forensic anthropologist, is the creator of the University of Tennessee's Anthropology Research Facility, widely known as the Body Farm. He is the author or coauthor of more than two hundred scientific publications, as well as a critically acclaimed memoir about his career at the Body Farm, Death's Acre. Dr. Bass is also a dedicated teacher, honored as U.S. Professor of the Year by the Council for Advancement and Support of Education. Jon Jefferson is a veteran journalist, writer, and documentary filmmaker. His writings have been published in the New York Times, Newsweek, USA Today, and Popular Science and broadcast on National Public Radio. The coauthor of Death's Acre, he is also the writer and producer of two highly rated National Geographic documentaries about the Body Farm.