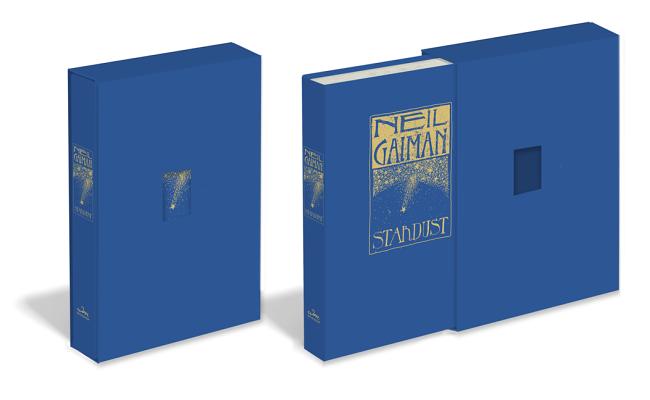 By Neil Gaiman
Email or call for price.
Not Available at This Time

"A twisting, wondrous tale full of magic that only Neil Gaiman could have written."
—Chicago Tribune

Among the wondrous, beautiful, and strange literary offspring conceived by Sandman creator, multi-award winner, and #1 New York Times bestselling author Neil Gaiman (Anasi Boys, Neverwhere, American Gods, Coraline, The Graveyard Book), his magical 1997 fantasy novel, Stardust, remains a top favorite. An enchanting adult fairy tale about a young man who travels beyond the boundaries of his small village to find a fallen star and win the heart of the woman he loves—the basis for the hit motion picture starring Michelle Pfeiffer, Sienna Miller, Claire Danes, and Robert DeNiro—Gaiman's glorious fable is now available in a special keepsake edition. Here is a gift of Stardust—beautifully packaged, with a special new introduction by the author—that every Neil Gaiman devotee will want to receive.

Neil Gaiman is the #1 New York Times bestselling author of more than twenty books, including Norse Mythology, Neverwhere, and The Graveyard Book. Among his numerous literary awards are the Newbery and Carnegie medals, and the Hugo, Nebula, World Fantasy, and Will Eisner awards. Originally from England, he now lives in America.

“A twisting, wondrous tale full of magic that only Neil Gaiman could have written.”
— Chicago Tribune

“Strange...marvelous...Stardust takes us back to a time when the world was more magical, and, real or not, that world is a charming place.”
— Philadelphia Inquirer

“[A] beautiful book, and most of all, perfect for all ages.”
— Desicritics.org on STARDUST