The Fall: Book Two of the Strain Trilogy (Paperback) 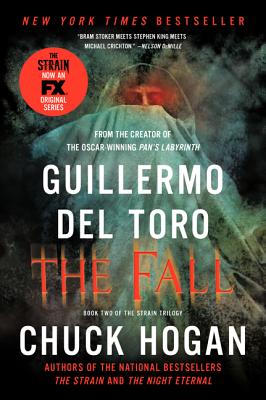 By Guillermo del Toro, Chuck Hogan
$17.99
In Our Warehouse - Expected arrival in 2-5 days

This is book number 2 in the The Strain Trilogy series.

“This book, the second in the high-tech vampire trilogy that began with The Strain, picks up where the last one left off. New York City is lost as the vampire virus is spreading faster than hope can sustain. Even with the complicated help of The Ancients, things are going very, very badly for the human race. The Rogue Master vampire who unleashed this plague has a very specific agenda, and the literal time bombs within that plan are already ticking. The answers lie in a cursed silver-plated book, but getting it isn't easy, and understanding it may take too long. It's a thrill ride on every page -- dystopia at its vampiric best.”
— Jackie Blem, Tattered Cover Bookstore, Denver, CO

From the Golden Globe winning director of The Shape of Water

“A cross between The Hot Zone and ’Salem’s Lot.”
—Entertainment Weekly

“I cannot wait to see where Del Toro and Hogan take us next.”
—James Rollins, New York Times bestselling author of Bloodline

The wait is over! Guillermo del Toro, one of Hollywood’s most popular and imaginative storytellers (Pan’s Labyrinth, Hellboy) and Hammett Award-winning thriller writer Chuck Hogan (Prince of Thieves) return with The Fall—the second blood-chilling volume in their critically acclaimed, New York Times bestselling Strain Trilogy. The Fall picks up where The Strain left off—with a vampiric infection spreading like wildfire across America as a small band of heroes struggles to save the dwindling human race from the vampire plague. Horror fiction and dark fantasy fans will be swept up in this epic story that bestselling author Nelson DeMille describes as “Bram Stoker meets Stephen King meets Michael Crichton.”

Guillermo del Toro is an Academy Award®–winning film director as well as a screenwriter, producer, and New York Times bestselling novelist. He is best known for his foreign fantasy films, especially Pan’s Labyrinth, and American mainstream movies like The Shape of Water. Del Toro has published multiple bestselling adult novels with HarperCollins, including The Strain, which was adapted into a TV series by FX, and he is the creator of Trollhunters, Netflix’s most-watched children’s series.

Chuck Hogan is the author of several acclaimed novels, including Devils in Exile and Prince of Thieves, which won the 2005 Hammett Award , was called one of the ten best novels of the year by Stephen King, and was the basis of the motion picture The Town.