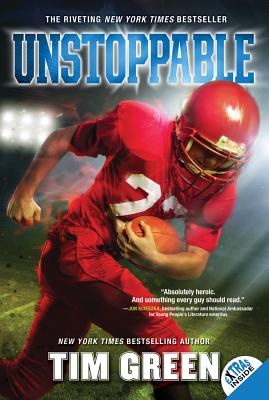 New York Times bestselling author Tim Green has written an unforgettable story—inspired by interviews with real-life cancer survivors and insider sports experience—showing a brave boy who learns what it truly means to be unstoppable.

If anyone understands the phrase "tough luck," it's Harrison. As a foster kid in a cruel home, he knows his dream of one day playing in the NFL is a long shot.

Then Harrison is brought into a new home with kind, loving parents—his new dad is even a football coach. Harrison's big build and his incredible determination quickly make him a star running back on the junior high school team.

On the field, he's practically unstoppable. But Harrison's good luck can't last forever. When a routine sports injury leads to a devastating diagnosis, it will take every ounce of Harrison's determination not to give up for good.

With hundreds of thousands of devoted readers, Tim Green’s books are the perfect mix of accessible and heartwarming.

“Could not put it down. It is so solid, and real, and true. Absolutely heroic. And something every guy should read.”
— Jon Scieszka, bestselling author and National Ambassador for Young People's Literature emeritus

“I don’t know anyone -- kid or adult -- who won’t root heart and soul for Harrison. Unstoppable means you can’t put this book down!”
— bestselling author Gordon Korman

“The star running back on his junior high school football team is diagnosed with cancer, teaching him the real meaning of bravery and determination.”
— Los Angeles Times

With a sharp intensity fueled by both wrenching events and the main character’s white-hot core of rage, Green sends an abused foster kid blasting his way through daunting challenges on and off the football field. Harrison’s ferocious struggles with inner demons and physical obstacles make absorbing reading.
— Booklist