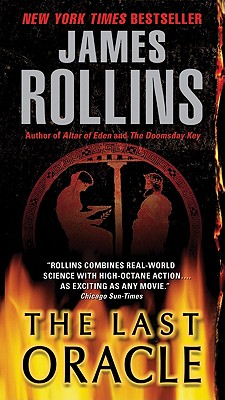 This is book number 4 in the Sigma Force Novels series.

“Peter David takes a huge risk in attempting a reimagining of the Peter Pan story and succeeds brilliantly in this deeply touching fantasy about the pain we all encounter on the road to adulthood.”
— Katie Glasgow, Mitchell Books, Fort Wayne, IN

In Washington, D.C., a homeless man takes an assassin's bullet and dies in Commander Gray Pierce's arms. A bloody coin clutched in the dead man's hand—an ancient relic that can be traced back to the Greek Oracle of Delphi—is the key to a conspiracy that dates back to the Cold War and threatens the very foundation of humanity. For what if it were possible to bioengineer the next great prophet—a new Buddha, Muhammad, or even Jesus? Would this Second Coming be a boon . . . or would it initiate a chain reaction that would result in the extinction of humankind?

Vital seconds are ticking rapidly away as Pierce races across the globe in search of answers, one step ahead of ruthless killers determined to reclaim the priceless artifact. Suddenly the future of all things is balanced on the brink between heaven and hell—and salvation or destruction rests in the hands of remarkable children.

Will the past be enough to save the future?

“Once again, the action is nonstop.”
— Sacramento Bee

“Rollins has outdone himself with this fabulous mix of history, science, and adventure that will easily increase his growing number of fans.”
— Library Journal

“Go out and buy James Rollins’s latest saga. He just keeps getting better and better.”
— The Barnstable Patriot