My Weird School #19: Dr. Carbles Is Losing His Marbles! (Paperback) 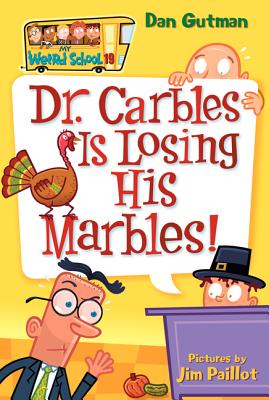 This is book number 19 in the My Weird School series.

With more than 30 million books sold, the My Weird School series really gets kids reading!

In the nineteenth book in the My Weird School series, it's Thanksgiving! A.J. is thankful for four days off from school. But he's not thankful for Dr. Carbles, who is grumpier than ever. Dr. Carbles even fires Mr. Klutz! Will A.J. and his friends be able to save their principal's job?

Perfect for reluctant readers and word lovers alike, Dan Gutman's hugely popular My Weird School series has something for everyone. Don't miss the hilarious adventures of A.J. and the gang.

Jim Paillot lives in Arizona (another weird place) with his weird wife and two weird children. Isn’t that weird? You can visit him on his weird website at www.jimpaillot.com